Will McMinn: Improving every week 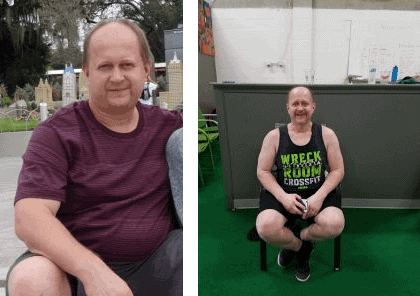 My name is William McMinn and I joined Wreck Room Crossfit May of 2016. When I turned 40, 8 years ago I had realized how out of shape and inactive I had become and wanted to do something about it.  I tried the p90x, I joined the gym just like many others my age and just like many other people couldn’t stick with it.

I met Butch while he was coaching my son for the Hero Boys race. I mentioned that I use to run like that and wish I could do it again.  He told me about Wreck Room and said I should stop by. The following week, I think was a Saturday, I stopped by, the place was busy, a little intimidating.  As soon as I walked in I was greeted by Colin, very friendly, welcoming, he took time to talk to me and explain a little what they do at Wreck Room.

My first month at Wreck Room was a wake up for me, we do a lot more than just bench press and curls, my entire body was wrecked, no pun intended. There were times the first couple months that I wasn’t sure if I wanted to get out of my truck, some good advice was given and that was to just show up.  That’s the beauty of it, just show up and they have your work out planned for you, coupled with great coaches and other individuals there of all at different levels, but all working just as hard as the person in the space next to you.

One of best things I like about Wreck Room is the atmosphere. Everyone here is friendly, motivational, supportive, accountable and competitive. Coaches are leaders as well as instructors.

Unlike karate or taekwondo I broke my first board my first week trying to do an overhead squat. (Squatted with two 2.5 pound wooden weights on the bar and lost it.)  A few months later and I’m squatting 75lb. Still have a long way to go but I’m improving every week. I’ve improved in a lot of other ways as well.  I have full use of my lungs again, I have lost nearly 30lbs, gained a lot more strength, endurance, and confidence.  I use to have back issues prior to Crossfit and thought it would be a big problem for me and it has not. Using correct form and not getting ahead of myself on the heavy weights has actually helped me from having any back issues at all.

In closing, I cant say enough about Wreck Room Crossfit, again, Coaches, fellow Crossfitters here are awesome and I look forward to many years of training with all of them.  POP POP, tree trunk, hook grip!!!