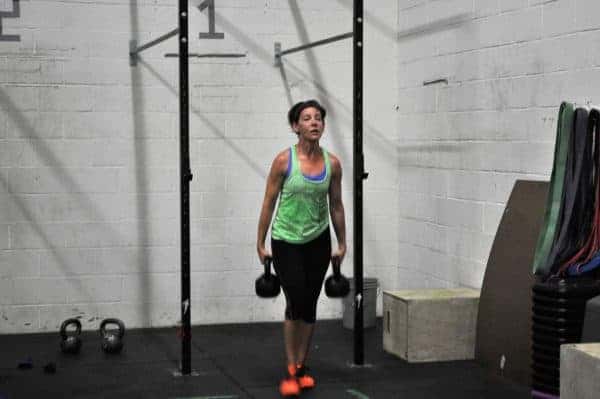 My name is Suzanne but I just go by Suz. I was born and raised in MD and currently live in Severn with my husband of 16 years and our two daughters. I’ve worked for the Department of Defense for over 25 years as both a civilian and contractor. Just under 2 years ago, I joined a software development company as 1 of 3 officers who run the company in support of the DoD. My title is Chief Visionary Officer which is just a fancy way of saying I make sure we make the right decisions and keep pushing forward.

I’ve always been drawn to exercise and have been running in one way or another since early middle school. Six years ago I ran my first half marathon and have since completed 17 more half’s, 2 full marathons, a handful of 10 and 12-milers and a challenge where I ran 2,015 miles in the year 2015. So yes, I think running is great but it is self-focused and all cardio. I wanted more whole body with insight into strength, diet, and lifestyle. CrossFit addressed all those areas so as crazy as everyone (including me) thought it was, I signed up for Foundations.

My first impression of CrossFit was that I had landed on a distant planet. I wanted to give it an honest try but was quite intimidated and everything was unfamiliar – the language, movements, and equipment. Google and YouTube quickly became my most frequently visited sites so I could make sense of what was waiting for me the next day. Now, I can’t imagine starting my day any other way. There is still plenty I have to learn but the scalability of CrossFit makes that process all the more doable. 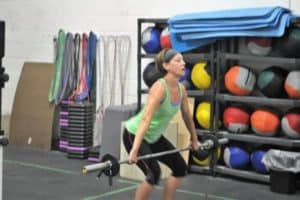 The first goal I hit was getting a 100 lb. squat, even though I got stuck in one of the squats during the set and Butch had to come save me!

Upper body strength in general is something I struggle with and getting past a 40 lb snatch would be awesome, along with a pull-up and getting double-unders to click. I’m also working on nutrition-based goals aimed toward a balanced diet that is clean and provides the right foods my body needs to be in peak condition.

My fitness endurance is the strongest it has been in my 43 years. I’m also much more focused on diet choices that will compliment my workouts for maximum benefit. Where I might have enjoyed a cheat food (or two) because I had a hard workout, now I think about what is best for recovery

My biggest change has been in opening myself to try things that I know are hard and would otherwise shy away from. It goes back to the beauty of scaling that CrossFit allows. Perhaps I’m unable to complete a movement as prescribed, that’s ok because it then becomes a new goal.

My favorite Wreck Room moment was completing my first group class after finishing Foundations. I realized I could do what the rest of the class was doing, perhaps with a slight variation, but the end result was the same and the best part was sharing all that with some pretty fantastic folks!