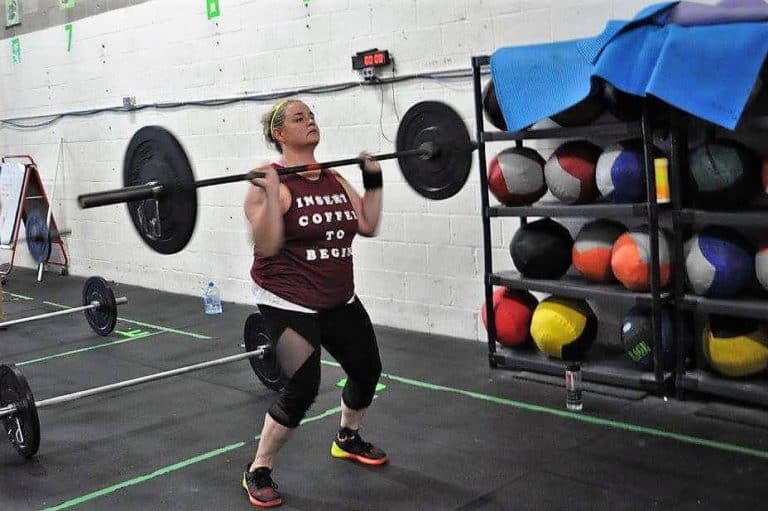 My name is Eileen Gagnon and I’m 31 years old. I’m originally from Syracuse, New York and moved to Baltimore in 2010 to teach in Anne Arundel County. I’m super passionate about my career and my goal is to eventually become an Assistant Principal.

It’s kind of a long story. I grew up playing lacrosse and played throughout college at the Division I level. It was really easy to stay in shape back then; I was constantly training, and the workouts and practices were grueling. I left college in good shape at 140 pounds, running a 6 min 40ish second mile, and lifting some ridiculous amount of weight. As awesome as that was, there were a few problems that immediately hit me: 1) I couldn’t play lacrosse anymore (I had accumulated too many concussions), 2) I had no idea how to eat and workout as a non-athlete, and 3) I had no one to help me navigate this transition from athlete to teacher.

Luckily, my first few years of teaching were spent in New York City. Teaching there was physically demanding and I had to walk everywhere to commute, so I would get in 20,000++ steps a day. That helped me maintain my weight for the most part, so I didn’t see the need to do much else. When I moved to Baltimore in 2010 though, I had to start driving everywhere and lost a huge part of my active NYC lifestyle immediately. My eating habits never changed; I was still eating (and maybe drinking) like a Division I athlete. I started to notice that I was gaining weight, so I did what everyone in Federal Hill does: I joined Merritt.

Merritt is a whole different story. I canceled my membership after a year. I continued to slowly put on weight, so I tried other things: jogging around Fed Hill (And getting lapped by every marathon runner living in that area), cycling (Those seats are not comfortable, and I fell off…twice.), Jazzercise (don’t judge. My young, 20-something friend teaches it and makes it look super fun. I however, have no rhythm and looked ridiculous.), P90X (Working out in my living room with my TV seemed like an oxymoron. I usually ended up napping), and Bikram Yoga (which I actually liked, but it’s a 2 hour commitment and doesn’t fit my schedule).

I even tried CrossFit once before – in 2013. I went to a different box back then (Wreck Room wasn’t around yet), and I felt very out of place. The people there were really nice, but they were also the hardcore, competitive CrossFit athletes you see on TV. I was so out of my league. I really wanted to keep up with them, but I was not the same athlete that I used to be. My body just wasn’t bouncing back into its groove as quickly as I wanted it to. I started to experience some chronic foot/ankle/shin pain (the result of old lacrosse injuries), which made it hard for me to walk (let alone complete a CrossFit workout). I quit after a few months out of frustration.

I didn’t make working out a priority after that. My feet and ankles constantly hurt, and physical therapy wasn’t making it any better. I knew I was gaining a few pounds here and there, but I couldn’t walk it off that easily. I was at a standstill.  Fast forward to October 2016. I stepped on the scale at a doctor’s appointment and saw a number that I’ve never seen before. It dawned on me: I had put on 100 f-word pounds since moving to Baltimore. It’s the equivalent of an entire second person! I cried. A LOT. It was devastating and humiliating and frustrating.

So, that’s what brought me BACK to CrossFit. I needed help losing weight and I clearly couldn’t do it on my own. I chose CrossFit because it was the closest thing that I knew of to the strength and conditioning coaching I had in college. I knew there would be someone to hold me accountable for every rep and set and that the workouts would be super grueling. I knew that I just needed my butt kicked and handed to me daily for the weight to come off. I chose Wreck Room because it was two minutes away from my work, which makes the battle of actually getting to the gym an easy win.

I was REALLY hesitant to try CrossFit again, mostly because of my feet and ankles. I knew they were going to hurt no matter what I did, but I was really hoping for some choice when it came to workouts with running and jumping.  When I met with Butch and Alyson for my No Sweat Intro, I was immediately super relieved. They seemed to really listen to me, and they were very understanding of my limitations. They were willing to work within my comfort zone and make adjustments to workouts if needed. I felt really encouraged and supported, so I signed up right away for Foundations.

It’s been eight months, and I still feel really encouraged and supported by everyone in the Wreck Room community. Butch and Alyson are always willing to meet with me to discuss my progress and set new goals. They give me a little boost in the right direction out of my comfort zone. The other coaches are really helpful and good at individualizing their tips and feedback since there is such a wide range of ability levels among the athletes. The other athletes are really kind, and everyone cheers each other on during those killer workouts. It has a team-like feel that I appreciate.

There are three. The first was getting out of bed the day after my first workout, and the second was getting out of bed the day after that. Every muscle aches and it’s hard to move. You don’t want to go back to the gym again, and you don’t think you can try another workout. It’s hard to push yourself, but eventually it gets easier and you’re not as sore. It helps that Alyson keeps tabs on you following Foundations – she makes sure you’re coming back for more.

The final hurdle was getting back into running and jumping. I avoided it in every workout for my first three months here. I just didn’t want to risk aggravating my feet and ankles. But then, I broke my wrist in February and had surgery to repair it. That hurt A LOT more than anything else. While my wrist healed my choices were either: stop coming to workouts completely or start running and jumping. I was kind of addicted to CrossFit by that point, so stopping just wasn’t an option – I pushed myself to run and jump again. I even started to run around my neighborhood…for fun.

In April, I actually ran in the Savage Race. My wrist wasn’t completely healed for some of the obstacles, so I made it a personal goal to run/jog the majority of the course. I mostly met that goal! Since then, running and jumping is still actually a hurdle. The pain still comes back and can get pretty bad, but I’ve started seeing a chiropractor and that has helped. I’m also at the point where I’d rather grin and bear it than be 100 pounds overweight. I’m still hoping that as more weight comes off, the pain will go away. I really need to stop face planting during warm-up runs, though.

When I joined, my first goal was to lose weight. It’s a pretty big long-term goal, but I’ve hit some big milestones. In eight months, I’ve lost close to 35 pounds. I didn’t start taking body measurements until last month, but I went down two dress sizes from October to May. From May to June, I’ve lost 6 inches. I’m hoping to lose 45 more pounds and/or drop 3 more sizes at least.

I just want to stick to a diet longer than a few months. In May, Butch helped me put together a nutrition program that has been a game changer. It really has changed the way I think about food and fueling up. I’ve also been getting meal prep help from Nicki. Between the two, I’m eating better now than I ever have before. I still struggle with making good choices at restaurants, and sometimes my portion sizes are a little on the generous side. I also haven’t given up my Starbucks.

I have more energy and I’m sleeping better. I’m less anxious and less stressed, which has made me a much happier person overall. I also finally believe that I can lose weight and I’m not fighting an impossible, uphill battle.

I feel like an athlete again. It was hard when lacrosse ended after college – it had been a huge part of my life for a very long time. Without it, I didn’t see the point of working out or running. Those activities were always a means to an end: staying in shape so that I could make it through the big games. I hadn’t learned to enjoy them separately. Since CrossFit is its own sport in a way, I’ve learned to really love it. It may be a means to lose weight, but it’s also a constant competition with myself. Every day I try to beat my time or weight from the day before. Every day I’m trying to get a little bit better and a little bit stronger. It’s what all athletes do, right?

I really enjoyed the 28 Day Nutrition Challenge. It was great to have a private Facebook group to talk about our struggles with balancing macros and share ideas about meal prep. Alyson and Butch gave really good advice and tips. We all were willing to share recipes or products that we had found, and we cheered each other on when we made it to a workout and didn’t die. It was just another support and way to hold us accountable. We need to start another challenge soon!