Alyson Becka: Better at everything 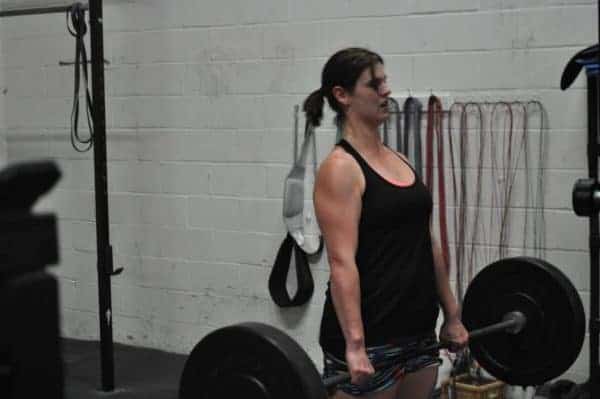 My name is Alyson, I am originally from South Carolina, but have lived a fairly transient lifestyle, as an adult, because my husband is in the US Air Force.  I have 4 children, and they keep me busy. 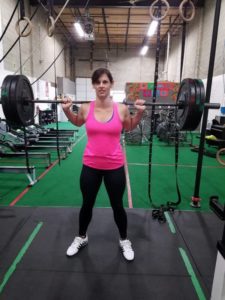 Before CrossFit, I really had not been active since college.  I would do some spin classes, maybe a little hiking on the weekends, but my diet was horrible and I had multiple bad habits.  At age 33 I was feeling old and frustrated with my appearance.   I was unhealthy.  Shortly after my 33rd birthday (and a super indulgent trip to Vegas) I decided that I would start being accountable and stop making excuses for myself.  I stepped out of my comfort zone and contacted Butch at Wreck Room.
Before I could talk myself out of it, I was in the gym speaking to Butch–less than a hour after my first email.

Thirty minutes later, after discussing my goals, I was signed up for 1 on 1 foundation sessions.

A week later, I was finishing up my foundations, sore and afraid of entering the group classes.

It was so nice when I discovered that my trepidations were unwarranted.  Everyone was so welcoming, so willing to help.  The coaches knew that I was new, and anticipated that I may need a little extra help with the WODs and my weights.  Everything was so organized, there was never a point in the class where I didn’t know what I should be doing.  The class time is partitioned so that every minute is utilized, from the initial group stretch, to chatting and rolling out after the metcon.

That’s when I realized that there was nothing to be scared of.  CrossFit isn’t just for the insanely jacked athletes that you see on television, there is a scaled version of every movement that makes it possible for anyone.

Here I am, 15 months later, and joining Wreck Room is one of the best things that I have ever done for myself.  Not only have I lost 20lbs and increased my strength exponentially, I have also had the pleasure of becoming a part of a community.  Getting to the gym is easy when you look forward to seeing familiar faces, when you know that the workout is going to be hard, but your friends are right there along with you.

I have enjoyed what I have experienced at Wreck Room so much, that, recently, I obtained my Sports Performance Coach certification from USA Weightlifting, in order to start coaching some of the 1 on 1 Foundation courses.  Next month, I will take the CrossFit Level 1 Certification Course.  I really hope that I can give to others what Wreck Room have given to me:  a more positive sense of self and the tools to obtain some pretty sweet quads.