Laura Morales: Proud of her changes 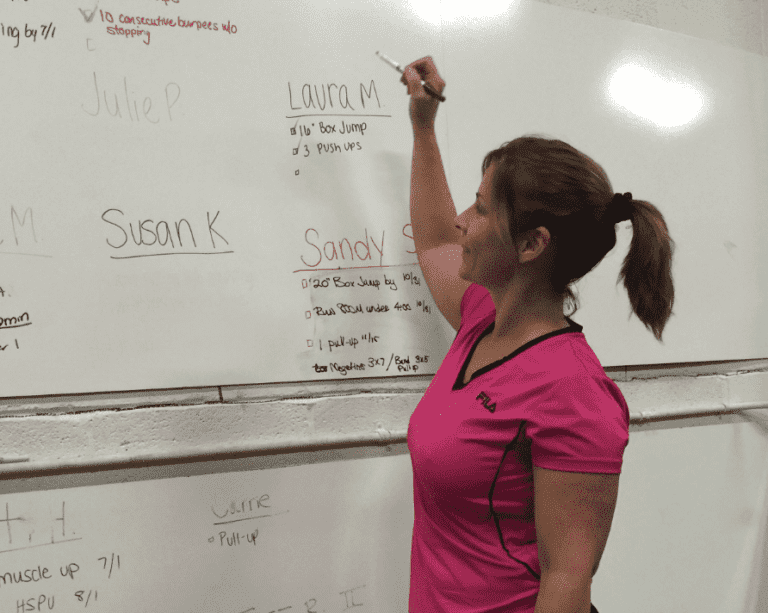 My name is Laura and I am a 48 year old single mom of two young men (ages 21 and 17), and Monday through Friday I’m the Senior Director of Finance at an international charitable nonprofit. I spend most of my days sitting in meetings or at my desk in front of a computer, which means I don’t have much time during the day to get any kind of exercise. When the boys were younger, I did a lot of running around for them, and didn’t have much time for myself between that and my “more than full time” job. It’s nice to have this time at Wreck Room that is just for me now!

It seems like everyone at Wreck Room is family, literally – or at least most people are related to at least one other person there! I’m not an exception. My sister told me about it and how much she was getting out of it, and she learned about Wreck Room through her daughter (my niece, Leslie). So, I gave it a try, because I knew I needed to make some changes to feel and look better – and seven months later I’m still here!

Not knowing anything about CrossFit (except that it’s really hard!) I didn’t know exactly what to expect when I first walked in. I had no idea about the “box” concept, so I was surprised how “simple” the equipment and movements were. Any other gym I’ve seen has a bunch of machines and treadmills, so I guess I expected the same. The “coach” vs. “instructor” concept also stood out to me. I guess it’s a subtle difference, but it is important! The coaches do just that, coach you to improve and do your best. In my experience, instructors don’t usually do that – at least not on such a personal level like the coaches do!

Why do I come to class? Some days I ask myself that!! It’s kind of a love-hate relationship, I’d say. I usually dread coming because of the hard work, but really look forward to seeing everyone there, and look forward to the feeling of accomplishment after I’m done. It’s also part of my routine now. I am pretty committed to going because there are always more goals to shoot for.

I think my favorite part of Wreck Room is really the people there. Yes, I’ve seen results, and I’m really happy about that, but whether it’s the other Lite Fit Ladies, the coaches, or the CrossFitters, everyone that I’ve met is really awesome. I love that there are people of all levels there, and everyone really respects and encourages everyone else. I really feel like everyone cares about everyone else’s success, whatever that means to them. It’s not competitive or intimidating at all. I’ve never been an athlete or have been part of a team before, so this is a first for me.

I feel like I have really accomplished a lot in 7 months. It started with me getting stronger almost immediately. On my first day, Taylor asked me if I could do a “regular” pushup, and there was absolutely no way I could. Within a month or so I was able to do one, and in a recent WOD I actually did a total of 74!! I am proud of myself for coming so far with that, but what I am most proud of is the changes in how I look and feel. One of my motivations for coming was to lose weight. After a while I was getting frustrated because I was working harder physically than I ever had before, but the weight wasn’t coming off. So, around the New Year I committed to making some changes in my eating habits, and I lost 20 pounds in about 12 weeks. Taylor told me that 80% of weight loss depends on your diet, and I believe it!

I could never imagine a WOD named after me, but I think it would be something with sit-ups, squats, and a few (short) runs. That’s because my abs, my butt and thighs, and my general cardio is what I feel like I need to work on most.

I have a feeling that I’m not alone in this, but if I never did another burpee again in my life I think I would be very happy. I mean, who the heck ever thought that would be a good idea?

Anyone who is serious about investing in their health and well being should give Wreck Room a try. The environment is awesome and you just need to come once to feel like you’re part of “the team”. If I can do it, I think anyone can! Lite Fit is great for me because the coaches and the other ladies there really inspire me, and I think CrossFit is the same. Come in, meet the coaches and some other folks and just do it!